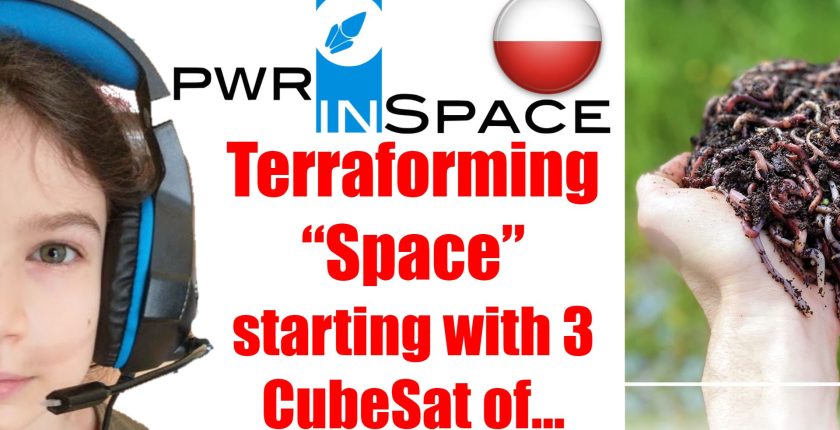 CubeSat Payload. Studying about #Terraforming #Mars 🥘 I was curious about a #Science #Experiment #Payload with 3 #CubeSat (10x10x10cm 1,33 kg each) of soil and worms, one of the most necessary #Ecosystem components, in the context of #Space #Exploration and colonization https://youtu.be/e6nUdhHtnic  👉Full interview https://youtu.be/lTKlJg5jo7w

Why send earthworms in “space” as CubeSat Payload

As from their paper, research on earthworms is highly desirable for missions on space stations and beyond, to develop out of Earth ecosystems. In upward flight, there are more cosmic radiations, which can have a significant role in the development of cancer cells. They tested 2 groups, the first studied directly during the experiment and the second as a control group on Earth.

The corridors that earthworms dig in the soil aerate the soil and drain off excess water. Earthworms also speed up the decomposition of harvest residues, which after passing through their digestive system are a readily available source of nutrients for plants. The activity of earthworms stimulates soil microorganisms, the growth of bacteria and fungi intensifies and the biological properties of the soil improve. In addition, earthworms improve the chemical properties of the soil because the nutrients they digest become better available to plants.

Their resistance to overload flight at higher temperatures will be tested. Future plans include a rocket flight to a higher altitude, followed by a stratospheric balloon flight where research on these organisms can also continue. The earthworms will not be in danger during the flight, as their module will be adapted and protected.

Not just earthworms but even Polychaetes in the CubeSat Payload

Not just worms but even Polychaetes, primarily marine organisms and can live a sedentary lifestyle as well as move along the bottom. Polychaetes as a class are robust and widespread, with species that live in the coldest ocean temperatures of the abyssal plain, to forms that tolerate the extremely high temperatures near hydrothermal vents. Polychaetes occur throughout the Earth’s oceans at all depths, from forms that live as plankton near the surface to a 2- to the 3-cm specimen (still unclassified) observed by the robot ocean probe Nereus at the bottom of the Challenger Deep, the deepest known spot in the Earth’s oceans.

Most polychaetes are predatory, others feed on plants, and still, others are filter feeders feeding on organic debris and small organisms. The latter was chosen for this experiment. Water filtration on space stations is an integral part of the design of such tanks. Therefore, it is a good thing to contribute to research on organisms potentially suitable for this purpose. As in the case of earthworms, polychaetes are not in any danger during the flight, they will be placed in a special chamber with water.

The main considerations in designing the module were that it would fit within the given CubeSat dimension and that the samples would be protected as well as possible. There will be three chambers. The first, located at the very top of the module, is a soil chamber that will hold earthworms. Right below it, is a chamber with gelatin, which will also house the earthworms. At the very bottom is a chamber with water, where polychaetes will be placed. The whole module is made of acrylic plates, connected with angles. The choice of material was determined by its durability and transparency.

As you can see in the video, the whole module will look like a small “aquarium” so that the specimens can be observed even when closed. It is planned to use silicone as a means of protecting the edges of the construction. Apart from that all the plates will be glued together and fixed to stabilizing angles with screws. Both the soil and the water will be specially prepared to avoid any undesirable components that could damage the samples. They will also be placed in chambers so that they fill up all possible space. This will avoid overloads and shocks that could endanger the samples.

This experiment is intended to contribute to the development of research on organisms useful in soil and water, on spaceflight. If such earthworms and polychaetes were sent to the space station, they would undoubtedly be sent in the environments in which they live, that is, in soil and water. If so, then the effect of radiation must be checked, despite the insulator that is soil.

🚀 PoliWRocket in Space Team, of Wrocław University of Science and Technology, – Poland. Whose goal is to share their passions, learn from each other, and construct experimental rockets together.